As an artist, I often hear comments such as, “You’re so talented,” or some variation on that theme, whether it is a comment that is posted online or an in person encounter.  I’ve gotten this remark from friends, family, strangers, etc.  And while it is always nice to hear such ego boosting compliments, I feel the need to pull back the curtain on the mystique of the talented artist conception. In fact, when others interpret my completed paintings and drawings as evidence of a natural talent for art, that I was born with, my facility with drawing and painting has been the result of a systematic and long-term method. This process is composed of some of the following ingredients: a strong passion to master drawing and painting skills, bloody minded determination not to give up on art, failure (not everything I draw or paint is successful), an extensive education in art technique and media, weekly practice in drawing and painting, just to name a few. And perhaps most importantly, I grew up with parents who were very supportive of my pursuit of art. For instance, my mom was the first one who introduced me to painting when she enrolled me in a watercolor class at the age of 9. I’ve been hooked on making art ever since! In fact, this summer I have embarked on a long-term drawing challenge to improve my drawing skills and I am realizing there is still so much I need to learn, and that I need the discipline to get better at my craft.

With regard to my weekly drawing practice, I have been working on a drawing challenge since June of this year, called, 100 Faces in 100 Days. In this challenge, I practice drawing on an almost daily basis. I focus on sketching celebrity portraits with paper and pencil, keeping the drawings simple so that they can be completed in about 45 minutes.  Some days the portraits seem to come together almost magically and I have very few drawing errors to correct, but on other days like today, I really struggle to get things right with the portrait measurements. On days such as these, I make a lot of revisions to the drawing, erasing, measuring and standing back to compare my drawing to the reference photo, until I am happy with the result, or the kitchen timer dings. And this phenomenon is nothing new. As an art student at McDaniel College, I had a lot of ups and downs, with paintings and drawings. Some were successful, others were not.

But to return to my initial question, Does natural talent exist? Although I am not a scholar or even a cognitive scientist, I theorize that many factors play into whether a person is able to show exceptional skill in drawing or painting, or any other impressive level of aptitude in a given domain. For example, in specialties such as singing, playing an instrument or sports, etc. I think it is a combination both of one’s environment, (the conditions you grew up with), specific personality traits, such as a strong work ethic, and a strong desire to master a subject. I think if I just relied on my innate talent, (whatever that may mean), I wouldn’t grow artistically because I would feel that no effort was required on my part to achieve greatness. The question of whether natural talent comes from has been discussed by  Kauffman, (2013), who states that there has been an ongoing debate about whether natural talent exists or not. Kauffman, 2013, states that in ancient time’s people believed that individual talent was linked to divinity, and that interest in this topic took a scientific turn in the nineteenth century, with the publication of the work, Francis Galton’s Hereditary Genius, which was published in 1869. Source: The Complexity of Greatness, by Scott Barry Kauffman, 2013.

For example, Kauffman (2013), states that  Galton made a study of “eminent lineages” and based on his findings, he theorized that talent was passed on to families from one person to another (Galton, 1874). According to Kauffman, 2013, Galton, also acknowledged the importance of not giving up easily, but he discounted the significance of environment as a determining factor of personal greatness for the individual, specifically with regard to celebrated scientists. The basis of Galton’s theory was that individuals were born with talent (Kauffman, 2013). On the other hand, Alphonse de Condole, (1873), “a French-Swiss botanist”, made the assertion that environmental factors play a critical role in the creation of exceptional talents, such as political conditions, religion, economic, social and cultural factors. ( Source: https://blogs.scientificamerican.com/beautiful-minds/the-complexity-of-greatness-beyond-talent-or-practice/) and www.wikipedia.org.

Other theorists, such as the 18th-century painter, Sir Joshua Reynolds, argued that art students should not rely on their talent alone to produce great art, but that they should practice their craft diligently, (Kauffman, 2013).  The contention about where skill or natural talent comes from has continued to be debated and studied among Scientists, scholars and researchers even as recently as the 2000s. For example, According to Lynn Helding, author of, Innate Talent, Myth or Reality?,  2011, the topic of greatness was more recently discussed by Psychology Professor, Anders K. Ericsson, who teaches at the University of Florida (Helding, 2011). Ericsson studied both the quality and amount of time it requires for an individual to achieve greatness in a specialty (Helding, 2011). In addition, some of the research he published on this topic was published as recently as 2015, in his article entitled, The effects of experience and disuse on Crossword solving, published in the periodical, Cognitive Psychology. Source: https://psy.fsu.edu/faculty/ericssonk/ericsson.dp.php.  His studies into this topic have formed the basis for “the magic number 10,000 for the number of practice hours that it seems to take for anyone (including “so called prodigies”) to attain a level of mastery at such high-level tasks such as tennis, golf, chess, piano, and violin. This term is also known as “The Ten Year Rule of Necessary Preparation.” (Helding, 2011).

However, since the well known and wealthy author and motivational speaker, Malcolm Gladwell, coined the phrase, “the 10,000 hour practice rule,” he frequently gets the credit for this theory and not Ericsson, or the eleven researchers “whose own deliberate practice, spread over more than a century, provided the data for the theory.” Source: http://scholar.dickinson.edu/cgi/viewcontent.cgi?article=1078&context=faculty_publications. Innate Talent: Myth or Reality, Lynn Heliding, 2011, Mindful Voice. Journal of Singing 67, no. 4, pgs 451-458.

The question of whether natural talent real continues to be debated on discussion threads in Quora and Reddit, which are some forum type websites. Users ask such as: “Does natural talent exist or all skills learned?” cited in www. Reddit.com, in 2013. In addition, this question is much like the nature or nurture question in determining how a person will turn out, and what determining factor plays the most crucial part in that process. We may never know the exact percentages of how much genes or environment can affect individual outcomes, or even if there is some type of gene that gives people an advantage in subjects such as math, athletics, music or art. But one thing I know for sure, I am going to keep practicing and not give up my painting and drawing practice, because I want to continue to grow as an artist. What about you? Do you think greatness is a skill that is solely learned by deliberate, ongoing practice or are some individuals born with some type of gene that gives them an advantage others do not have?

My first version of this painting was made with sepia brown watercolor paints. I’m not sure I like this color and the composition feels too busy. 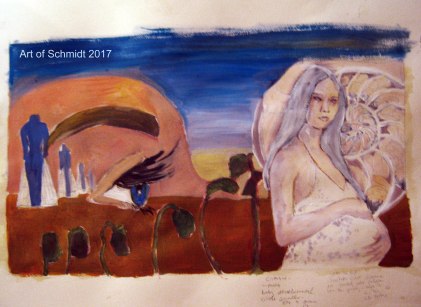 I painted out the brown watercolor paint to try and make the image more interesting with a limited color palette of yellow orange, red orange, blue, green, peach and blue violet. Still a little too busy with the composition.

Quote of the week.

Stage 1 of my Canada Geese Painting starts with a simple color sketch in pastels to choose the color scheme.

Stage 2 follows the color sketch with a small painting with Liquitex acrylic paints being applied to a 4 x 4 inch canvas panel.

Did you know that the color of your paper can affect how your pastel drawings will appear? Even changing from white pastel paper to dark green pastel paper can make the same colors look more saturated! In my Continuing Landscapes pastel course, we will go over concepts such as color bias, value, and color mixture to capture the four seasons in landscapes. Sign up today on www.delaplaine.org. Classes start in July, and space is limited. #course, #summer, #color, #softpastel, #rembrandt, #instructor, #jodieschmidt., #delaplaineartscenter, #frederick, MD, #learn, #something, #new, #creativity.