This week I am between projects, as I have just finished the 100 Faces in 100 Days drawing challenge. I also completed some paintings for the Frederick Coffee Company Art show I just finished. So now the perennial question, what do I work on next, and what do I blog about next? I have finally picked up the brush and pencil this Monday and started to revisit the drawings and photoshop files I created for my Voices and Visions poetry illustration series. These works are in the very beginning stages and I started them with evaluating the compositions of some of these files in Photoshop and re-organizing them. After that, I worked on transferring the photocopies of these illustrations to watercolor paper and illustration board. One painting even got to the basic lay-in with acrylic painting stage, but the others need another coat of gesso before they will be ready to paint.

It seems that the bad news I got from the Doctor’s Office on Monday has helped catapult me to action with this series. For the past several months I have been focusing on promoting art shows and administrative duties such as marketing, data entry, pricing, packing up art shows and setting new ones up, etc. However, the phone call I received this Monday, reminds me of all the other times I got disturbing news but had to find a way to get through everyday life in spite of it. This week has really been a déjà vu, of all the experiences and emotions I felt during my dad’s illness from March 2011-September 2011 when he passed.  But with all that being said, the real take away I have had from these experiences is that tomorrow isn’t promised and that I need to make the most of the time I have today.

In March of 2011, I got the phone call that everyone dreads; my father had had a stroke. My sister had called the ambulance and he and was at Montgomery General Hospital where they were testing him for various things. This event ushered in several months of inconclusive tests, different diagnoses, hospital visits, sleepless nights and ongoing stress and uncertainty for me and my family. I felt totally unprepared for this kind of long-term stress and I didn’t know how to cope with it. The situation was also a shock because my father had always been a healthy man and never seemed to have any ongoing illness, other than his recent bout with shingles. I turned to making art as a way to try and introduce some calm and predictability into my days so I could go on working, doing laundry, etc. I discovered that attending art classes every week with a local artist, Rebecca Pearl 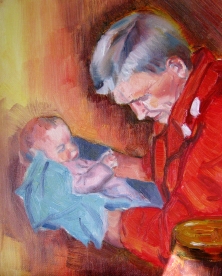 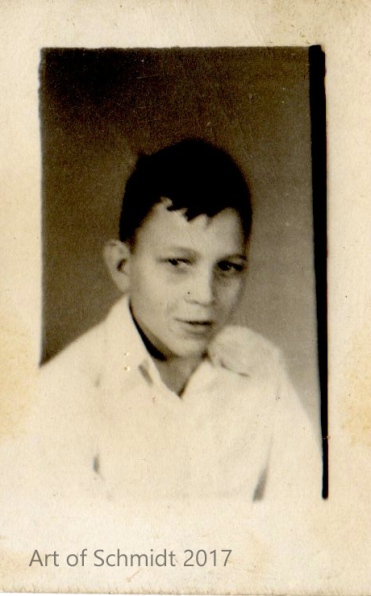 School photo of my father as a child provided the inspiration for my painting of Dad as Young Boy. 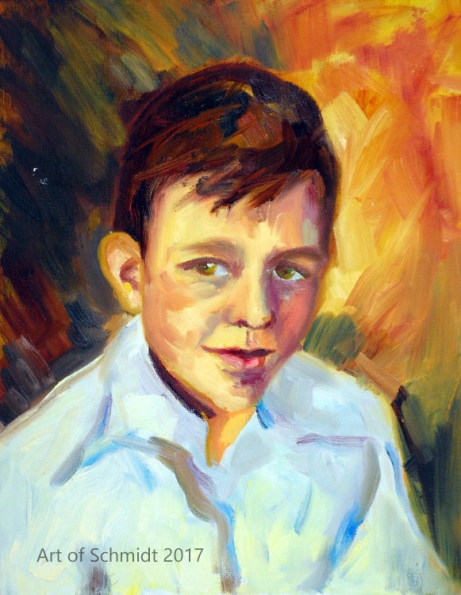 A photo I found of my father and his first wife, Phyllis, taken sometime in the 1940s or 1950s, provided the composition for the painting, Dad and Phyllis.

introduced some much-needed structure into my days. After my father passed in September of 2011, I was still dealing with a lot of emotions. I decided to create a series of portrait paintings about his life to try and process the grief and to create a meaningful way of honoring his memory, using family photos as references for the oil paintings. Some days I could barely paint and looking at the photos of him in happier times was really difficult. Other days, I was able to paint without feeling so sad. And now, several years later, I am turning to art again as a way to cope while waiting for answers about my diagnosis of a low platelet count.  I have to wait for two more weeks for another round of tests to get some more conclusive answers, hopefully.

2 thoughts on “A Life Remembered: Paintings that Helped Me Process Grief”

Join 158 other followers
Are you looking for a new creative outlet? Then my class, Drawing, and Painting: A mixed Media Survey may be perfect for you! Learn a variety of media each week, such as watercolor and pen, acrylic and collage, pastel and watercolor, and so much more! Visit: https://www.frederick.edu/class-schedules.aspx. I teach non credit courses in the ILR division. Click on ILR Fall 2022 schedule, pdf or flipbook version to learn more! #mixed media, #class, #Frederick, #Community, #College, #ILR, #noncredit, #metime, #drawing, #painting, #artofschmidt, #jodieschmidt, #instructor, #artist.