Have you ever wondered why some artists, such as Andrew Wyeth, and others create their artwork in a series format? My first experience with creating artwork as a series was as an undergraduate at McDaniel College, taking art classes at the senior level. In this Senior Studio Capstone class, my fellow students and I were given the assignment to create a series of artworks that expressed a theme of interest or importance to us and to write an artist’s statement that described our artwork’s theme.  For example, according to the website The Abundant Artist, some themes that artists might explore in a series include, 1.) texture and color (Faith Ringgold), 2.) politics  (Kathe Kollwitz), 3.) death, (Hirst) or 4.) messages that uplift, like Kelley Rae Roberts.   Prior to that, my assignments in drawing and painting consisted of drawing or painting to try and copy the still life or model in front of me, to teach the skills of observation. At that time, I had no idea how to even get started and had artist’s block for two weeks while I searched for artworks that inspired, all in vain. My Teacher did give us some guidance on the process though. He suggested that we create sketchbooks in which we pasted artworks of inspiration, no matter the medium, and he suggested that we look up art magazines, such as Art in America. Pouring over art magazines and artist websites, such as Forum Gallery, I could think of nothing new to say with my artwork that hadn’t already been said. I felt I had a lot of competition since there have already been many artists who have gone before me, who have created several unforgettable artworks to boot, such as Vermeer’s, Girl with a Pearl Earring, painted in 1665.

After weeks of struggle and seeking out artwork that inspired me, I had a solution. My answer came from an unlikely source, music. I decided to illustrate some of the songs of my favorite musician, Sting, using my self-portrait as a muse, along with color, and composition to portray various feelings of uncertainty, sadness, etc. Some of the songs I illustrated in my self-portrait series were Lithium Sunset and Secret Journey. The first song talks about how medication can help bring a person out of depression and make them strong enough to get back up again. While the second song, Secret Journey, talks about a mystical journey of enlightenment. I printed out the songs from Sting’s website, www.sting.com, pasted them in my sketchbooks, and underlined words and phrases that I thought were good candidates for illustration. And I referenced these songs and artworks of inspiration as I crafted my Artist’s Statement. As I searched through artwork that inspired, it became evident that I was drawn to the subject of the portrait, but I didn’t know how to make my work unique because the portrait has been done numerous times before.

The imagery of Sting’s songs provided the perfect solution to my dilemma and I was off and running. My then boyfriend, Dan, took photos of me to provide the source photos for my oil paintings. To make a long story short, I finished the series in time and even made a power point presentation as part of the project requirements of my finished works. In addition, I crafted an artist’s statement, which helped me to define the artwork by describing what the artwork would be about and what influences had to lead me to the finished work. I learned a lot about myself as an artist, such as how to distill ideas through writing artist statements and creating sketchbooks to illustrate my ideas by pasting artwork that inspired onto its pages. In particular, I discovered that I liked to make artworks that had a message, even if the search for the solution was far from easy. But back to my main question, “Why should artists work in a series?”

To investigate that question more fully, I did what many people would do, I googled it.  The websites, Abundant Artist and Art Business.com,  shed some light on the subject of content-based art. According to the authors, some of these benefits include: 1.) Making artwork in a series gives the artist a platform to connect with their audience on an emotional level because the artwork is focused and personal, 2.) Creating artwork in a series format helps others to understand what an artist’s work is about and who they are as a person, 3.) Artists who make artwork in a series are more likely to find art galleries to exhibit their work 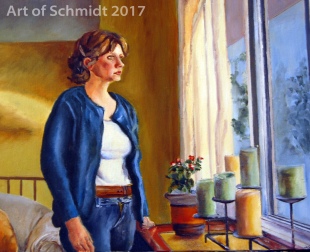 Self-Portrait with Scenery, Oil on Canvas, 2004.

because they know how to market the artist and this format follow their business model, and 4.) Working in a series format helps artists to understand what topics/subjects are important to them, and which they like to draw or paint.

Join 158 other followers
Are you looking for a new creative outlet? Then my class, Drawing, and Painting: A mixed Media Survey may be perfect for you! Learn a variety of media each week, such as watercolor and pen, acrylic and collage, pastel and watercolor, and so much more! Visit: https://www.frederick.edu/class-schedules.aspx. I teach non credit courses in the ILR division. Click on ILR Fall 2022 schedule, pdf or flipbook version to learn more! #mixed media, #class, #Frederick, #Community, #College, #ILR, #noncredit, #metime, #drawing, #painting, #artofschmidt, #jodieschmidt, #instructor, #artist.