Today I taught a pastel workshop at the Colorful Canvas art supply store in Frederick, MD. It was quite a change stepping into the teacher’s shoes after years of being a student. I was amazed at how quickly my students picked up all the various concepts I tossed out at them including line, shape, color, and value. I started with a drawing and broke down the fruit still life into basic shapes. After I had done that, I broke down the colors and values to their most basic levels and continued to refine them. In addition, I took breaks in between each step, so the students could follow along and not get lost in the process. I hope to be able to teach another pastel class soon! Below are some photos of the art class students I taught today and the artwork they created. Thanks for stopping by! 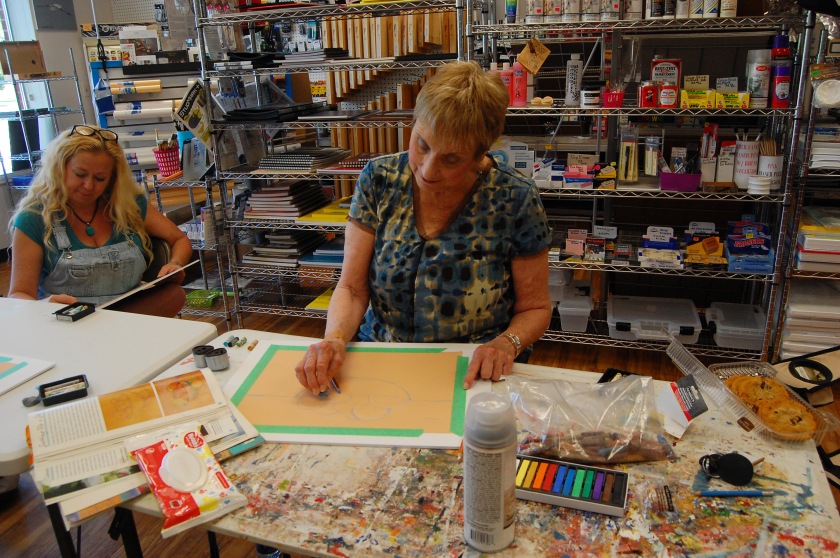 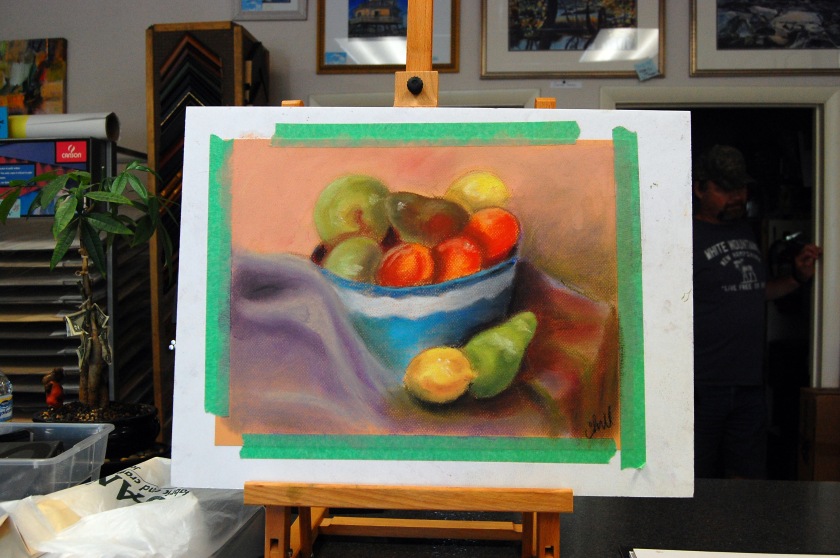 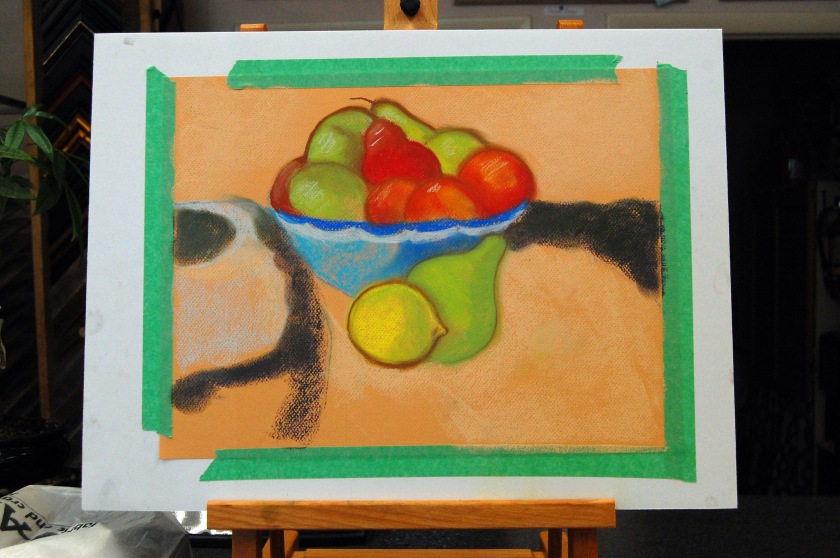 Why I haven’t been Blogging

Maybe you’ve noticed that I haven’t been blogging much recently and have wondered whether I had fallen off the planet, or have given up on blogging entirely or making art for that matter. It has been a month of life-altering changes since my husband and I bought our first home this past March. I have struggled to make time for art, much less write about it with all the additional responsibilities which have been added to my plate that come with being a homeowner. For example, the house is a fixer-upper, and my apartment needs to get ready for the move as well. I am sorry to say that despite my daily efforts, I still don’t feel prepared, even though the move is only one week away. My husband and I both work, and we’re spending nights and weekends trying to get our home move in ready. It’s been a lot of physical work too, and it’s been draining, exhausting work. Somehow, blogging has fallen through the cracks. In the middle of all this, I have been trying to complete a custom art portrait before the move, and to get to my sketchbook to draw and paint at least 1x a week. Furthermore, I want to present you with quality material and writing doesn’t come naturally to me. So, that’s why I have taken a break from blogging until I found a subject which really resonates with me. This brings me to my next point.

Failure: A topic with which many can relate

I’ve been thinking in depth about blog topics for a while now and trying to figure out what to write about. During this time, I have wondered, what kinds of topics would appeal to both artists and non-artists alike? After considering several topics, I decided that I wanted to write about “famous failures” which were written about by Sid Savara, in his article, “(Sivara, Sid. Famous Failures: Michael Jordan, Abraham Lincoln, and J.K. Rowling. https://sidsavara.com/famous-failures-michael-jordan-abrahma-lincoln-andjk-rowling/.Accessed 29 March 2018.  In my personal life, this topic feels increasingly relevant.  I have been dealing with several challenges in my art career, such as struggling to find consistent income from art sales. In truth, there have been a lot of ups and downs with my art sales over the years and I’m not sure what I can do to tweak my approach toward selling my artwork. At times, I honestly just feel like just giving up on the business aspect of art, and pursuing it as a hobby instead. There are so many aspects involved with being an artist-entrepreneur and I do not know if I have the drive, intelligence and patience to run that type of marathon, or the ability to learn skills so outside of my skill set, like marketing. It is a constant juggling act between the business side of being an artist and actually making time to make art.

My Personal Failure: Why Isn’t My Art Selling?

One of the setbacks I have been dealing with is inconsistent art sales. I’m asking myself, why isn’t my artwork selling? Could it be that I am not using the right marketing strategies or that I don’t post often enough on Facebook, and Instagram? Do I need to work more on my presentation of my artwork through my photography on my website, and commerce sites by purchasing a new and more professional camera and learning new photography techniques? Or, is there some other reason I haven’t figured out yet? Is it my medium, price point, style, or subject matter? Do I need more of a range of prices to attract more customers to my Etsy shop, Red Bubble shop or art shows? In the meantime, while I consider these questions, I am drawing inspiration from “famous failures” to learn how other people have successfully dealt with personal setbacks.

One of my favorite famous failures is Abraham Lincoln. To begin my discussion of this topic, I would like to start with a quote from Michael Jordan who stated: “I have missed more than 9,000 shots in my career. I have lost almost 300 games. On 26 occasions I have been entrusted to take the game-winning shot, and I missed. I have failed over and over and over again in my life. And that is how I succeed.” ( Sivara, Sid. Famous Failures: Michael Jordan, Abraham Lincoln, and J.K. Rowling. This quotation originates from a Nike Commercial by Michael Jordan, entitled, “Failure”.)

In a similar way, to Michael Jordan, Abraham Lincoln also faced many failures and setbacks on his journey to becoming the 16th President of the United States and one of the best we’ve ever had in my opinion. According to Savara, some of Lincoln’s failure’s included: being unemployed in 1832, being beaten for the legislature in 1832, failing in business in 1833, and rejected for Speaker in 1838. It was not until 1860, that he reached his greatest achievement when he was elected President of the United States. (ibid)

How did Lincoln going despite his countless challenging life circumstances and personal tragedies and probably clinical depression? I’m not sure what the answer to that is at the moment, but from one of his quotes, I would deduce that he was not content with failure and would not let it define him. In the words of Lincoln: “My great concern is not whether you have failed, but whether you are content with your failure.” To look at this question in more depth, I have done additional research about his strengths as a leader and some of his personal coping strategies, such as writing letters to people he was angry with and not sending them, which he called, “hot letters,” telling jokes to ease his melancholy, having good self-awareness  about  his weak points. Some other strengths he possessed include:  constantly learning and adding to his knowledge base, such as his intense study of military strategy, so he could play an active role as commander-in-chief, during the Civil war and talk directly to military leaders about their military strategies, and finally, listening to the opinions of others, whose opinions differed from his own, (Sources: Shenk, Joshua Wolf. Lincoln’s Great Depression. The Atlantic Monthly, October 2005 Issue, https://www.theatlantic.com/magazine/archive/2005/10/lincolns-great-depression/304247/ Accessed 19 April 2018, Coutu, Diane. Leadership Lessons from Abraham Lincoln. The Harvard Business Review, April 2009, https://hbr.org/2009/04/leadership-lessons-from-abraham-lincoln. Accessed 19 April 2018, Moreton, Catherine L.10 Qualities that Made Abraham Lincoln a Great Leader, June 25, 2008, https://hr.blr.com/whitepapers/staffing-training/leadership/10-qualities-that-made-abraham-lincoln-a-great-lea. Accessed 19 April 2018.

To conclude, I am going to divide this topic of Famous Failures, into sections so that the articles will be short and more readable. Each article will focus on a specific person

with specific details about their stories. So next week, I will be writing about the life story of the author, J.K. Rowling. I hope that you enjoyed this post and that it brings light and encouragement to your day. Failure is inevitable but how we respond to it, is our choice.

I will be teaching a mixed media course at the Delaplaine Art Center in Frederick, Md in July. The course will go over collage and mixed media techniques. Pictured is a screen shot of a Romare Bearden collage we will be copying as a classs project. To learn more, go to: https://delaplaine.org. #class, #mixedmedia, #mastercopies, #collage, #paintings, #acrylic, #pen, #ink, #markers, coloredpencil, #delaplaineartscenter, #jodieschmidt, #frederick, md.