In my experience as an artist and teacher, I have learned how important it is to incorporate a wide range of value in my own artwork and art demonstrations. Test the truth of this insight by joining my art course, Continuing Landscapes at the Delaplaine art center this July! We will start with pastel techniques, and then work our way through the elements of art, such as value and color, etc. to build successful landscape pastel paintings. To learn more, visit https://delaplaine.org/. 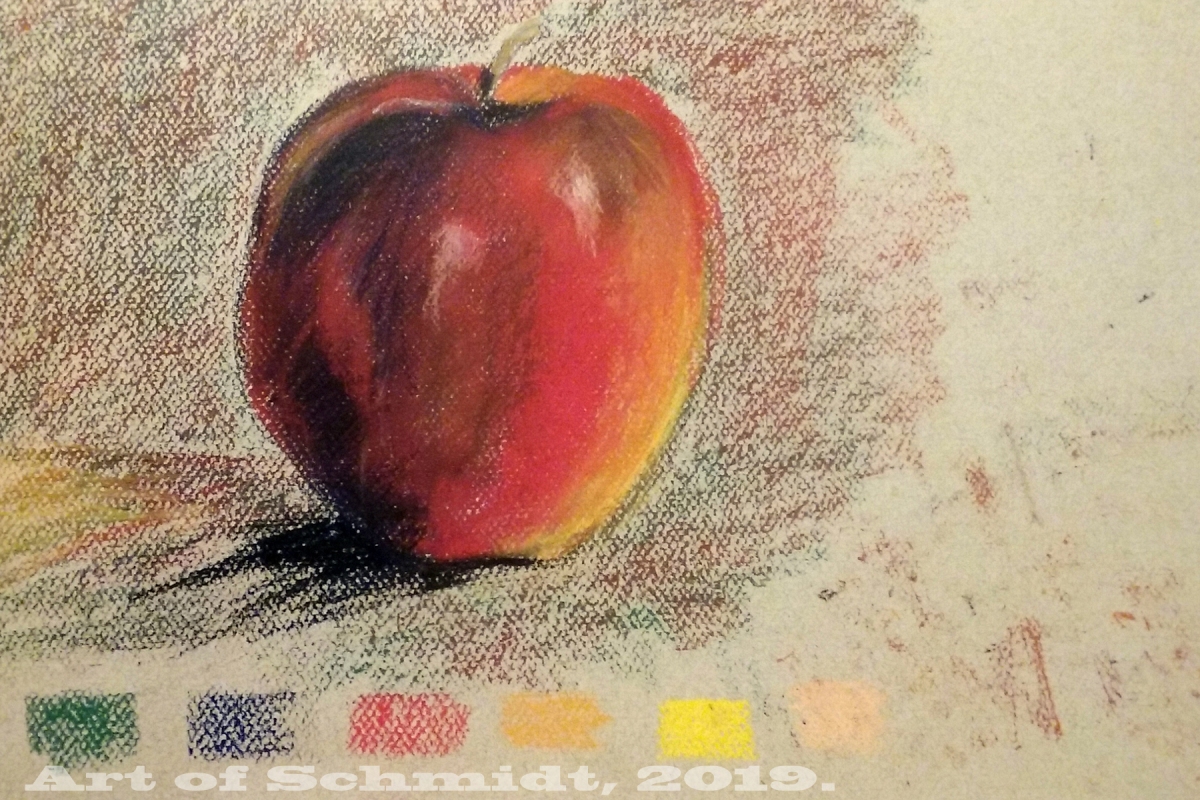 This Winter I will be teaching art classes at two different locations! I am honored to join the staff at the Adams County Arts Council in Gettysburg, PA, and will be teaching two art courses there. Beginning in February, I will be offering a beginner’s pastel course that will guide you through the basics of value, shape, and color and teach you to paint in the style of the Impressionists. To learn more about this course, visit https://www.adamsarts.org/classes/.

And in January I will be teaching a beginner’s course in drawing called, Classic Drawing at the Adams County Arts Council. If you have ever wanted to learn how to draw this is the course for you! Or, if you need a refresher in drawing fundamentals such as shading and building objects from simple shapes, this course will help you get back into the groove! Visit this link for more details: https://www.adamsarts.org/classes/.

I will also be teaching the beginner’s pastel course in February at the Delaplaine Art Center in Frederick, MD. To register or learn more about this course, visit this link: https://delaplaine.org/instruction/classes-workshops/.

Art of Blog Schmidt: How to Build Artistic Muscles

Hello Readers. This is an older blog post, but I felt that it has some points which still resonate with me, such as the importance of making time to practice my craft as an artist, making daily and weekly time to work on my paintings and drawings. This new series, Constructed Realities has been challenging in many ways, with challenges in coming up with new ideas, overcoming weaknesses as an artist, and sometimes just getting started. I feel afraid to make a mistake sometimes, and just have to choose to jump into the deep water and see what happens. Below is a recycled blog post, How to Build Artistic Muscles. But the artwork I am posting here is new. This artwork is based on song lyrics and poems, and is all about the figure, using mixed media materials for drawings and paintings.

A few weeks ago, one of my art fans complimented me on a painting which she had viewed on my Art of Schmidt website, entitled, Phyllis and Dad. She said that she liked the colors, that she admired my talent, and wanted to know the story behind the painting. I told her that the painting was based on a collection of family photos that I had collected and that I always remembered my father as being older than other kid’s fathers. I also shared that this was the first photo I had ever seen of my father taken when he was young. Although I do not know his exact age, as the picture is not dated, I would estimate that he was in his early twenties when this photo was taken of him and his first wife, Phyllis.

I was of course, grateful to hear the compliments about my artwork, but at the same time, I wanted to share that the artwork I post on my website does not come about by magic. It takes a lot of effort.  Furthermore, sometimes more than one version of a painting or drawing is created to lead to the finished product that people see on my website, commerce site, and social media feeds on Facebook and Instagram. In fact, I have to practice on a weekly basis to keep my drawing and painting skills from getting rusty. During this conversation, I shared all of these insights with her and I hastened to add that if I relied solely on my artistic “talent” then it wouldn’t get me very far. Instead, I have found that practicing art is much like practicing a sport or playing an instrument. I believe that in order to get good at any of these disciplines, one needs to practice, a lot, and on a regular basis to maintain a certain level of skill. And sometimes it may require me to make a drawing or painting over and over again until I get it “just right.” In the words of songwriter, Sting: “I will reapply the needle of the record player again and again to the bars of music that seem beyond my analysis, like a safecracker picking a lock, until the prize is mine.” (Sting, Broken Music, dust jacket cover, 2003).

I was thinking about this conversation this week when I was trying to decide what to blog about. While I was pondering this, I wondered how to make this knowledge which I have gained about the need for artists to practice their art, into an applicable blog post that anyone can learn from. According to the author, and textile artist, Bren Boardman, one specific way for artists to stay “in practice” with their craft is to keep a sketchbook. The sketchbook serves as a repository to record their ideas and inspirations, such as “color swatches, quotes, magazine clippings, newspaper cuttings, or reference photos” for artwork in progress. (Boardman, Bren. “Sketchbooks and Mind Mapping for Artists”, https: www.textileartist.org).

Bren Boardman, textile artist, and author of the article, “Sketchbooks and Mind Mapping for Artists”, states that sketchbooks can help artists to develop their ideas for artwork and that using a mind map in their sketchbooks is an effective strategy for fleshing out ideas for new artwork. In her article, she provides some useful tips on how to start a mind map diagram, sort of like the “web” I remember from grade school in which my teachers used to help my fellow students brainstorm new ideas. In Boardman’s mind maps, she starts with a word or phrase that encapsulates her concept for a new artwork and draws connecting branches, which describe her ideas in more detail, sometimes using imagery. To start a mind map, she recommends that you write a word or phrase, with which you can associate, the main idea. (Boardman, Bren. 2013)

In addition, Boardman states that it is helpful to consider what type of sketchbook you would like to create such as a reference sketchbook, where you might “collect color mixing tests, color swatches or samples, or an idea generation sketchbook”; such as creating a mind map which describes the process and ends with the final result. On the other hand, perhaps you might make a sketchbook that would describe a trip or journey. Furthermore, if you still feel overwhelmed about the process of starting a sketchbook, I’m including a list of suggestions that Boardman offers in her article to get you started with the process. For example, you might include: “photos, magazines or prints, magazine or newspaper cuttings, drawings, sketches and doodles, text, poetry, stories, thoughts, thoughts, letters, extracts, statements, words, fabric, threads, wools, beads, buckles, papers of all kinds.” (Boardman, Bren. “Sketchbooks and Mind Mapping for Artists”)

In this blog post, I include my process for adapting  Boardman’s mind map idea and translating it into a project I wanted to create a genealogical portrait of recording artist, Sting. My inspiration for this project was based on an overworked watercolor painting I made last summer, a portrait by Durer of a man standing in front of a landscape,  and a TV miniseries, entitled, Finding Your Roots, with Henry Louis Gates, J., on PBS. The segment I took inspiration from was called, “Sting, Sally Field, and Deepak Chopra,” and was filmed in 2014. Gates spoke with each individual in turn and he shared what he had learned about their ancestry through genealogical research. In particular, Gates shared that Sting’s third-great grandparents were lacemakers who started a family in Nottingham, England in the 1820s. However, due to the Industrial Revolution, which led to mass production of products and consumer goods, they were forced to seek work elsewhere in Calais, France, and Australia.

I took inspiration from this TV series, a failed watercolor portrait of Sting, and from a sketch by Duerer which featured a portrait of a man and a landscape in the background.  To record my thoughts, I took notes as I watched the TV segment and I re-draw these thoughts in a mind map. I knew I wanted to make a portrait that was different from the typical face front painting or sketch of a person with a wall as background, and that I wanted to let the artwork tell a story about the person. I wanted to use symbols to tell the person’s story so that it would lead the viewer to contemplate the scene and ask questions about what the symbols might mean. After I completed the notes, I set to work looking for images on the internet of Sting, his home town of Wallsend, England, and some symbols to describe his ancestor’s migration to France and their profession as lacemakers. Then I put all the photos together in Adobe Photoshop to create a collage as reference for the resulting sketch and three value watercolor painting. I plan to continue this project as a larger acrylic painting in a 12 x 24-inch size. Stay tuned for more updates on my painting process of this portrait! Thanks for stopping by!

Did you know that the color of your paper can affect how your pastel drawings will appear? Even changing from white pastel paper to dark green pastel paper can make the same colors look more saturated! In my Continuing Landscapes pastel course, we will go over concepts such as color bias, value, and color mixture to capture the four seasons in landscapes. Sign up today on www.delaplaine.org. Classes start in July, and space is limited. #course, #summer, #color, #softpastel, #rembrandt, #instructor, #jodieschmidt., #delaplaineartscenter, #frederick, MD, #learn, #something, #new, #creativity.